We are Hiring! find out more


We are looking for full-time web developers and support roles.

British Bakeware wanted an attractive and user-friendly ecommerce website that would allow them to sell their assorted kitchenware products to customers throughout the UK. Additionally, they wished to include a blog that would enable them to share recipes and recommend uses for their products on social media. The solution that we created for them is both functional and extremely good-looking! Visit British Bakeware > 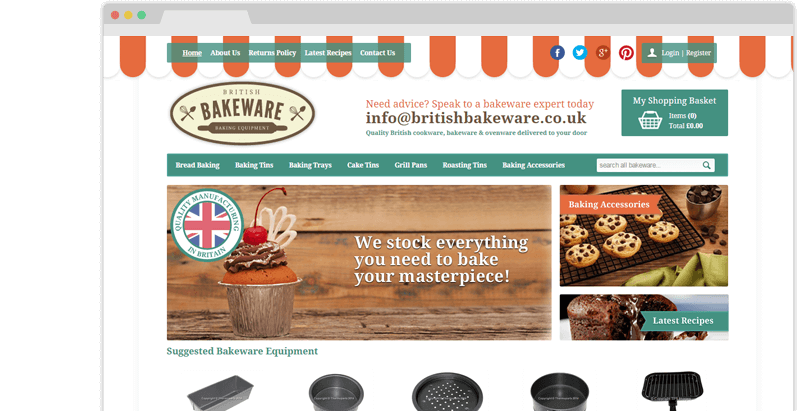 We created www.britishbakeware.co.uk, a bespoke ecommerce website that’s great to look at and enjoyable to use. The company’s products are displayed on attractive, easy-to-navigate category pages, and the recipe book-style baking blog is perfect for its purpose, allowing the British Bakeware team to recommend dishes and integrate these posts with the products themselves. 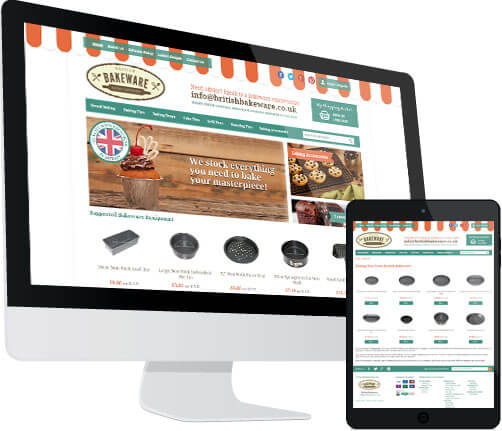 What Our Customer Said...

"We had worked with Designer Websites on a couple of other projects in the past, so we were confident that the company would be able to deliver outstanding results this time around too. We weren't disappointed - the British Bakeware site looks fantastic and is already attracting lots of organic search traffic, not to mention a lot of attention on social media platforms like Twitter! Thanks again to the Designer Websites team for all the hard work they put in."

Rhod Howells – Commercial Manager Get a Blog Development Quote >
Services We Supplied
Website Design
Full Product Management
Bespoke Ecommerce Website
Search Engine Optimisation
Online Payment Integration
OGL Integration
Ecommerce Websites: British Bakeware British Bakeware is a UK-based supplier of kitchenware and cooking accessories (such as baking trays, loaf tins, and grill pans). The company wanted a way to present these products – which look rather plain as they are – in an attractive, engaging way that would encourage potential customers to take notice. They asked Designer Websites to create a colourful, charming design that would evoke the spirit of traditional British baking and make their range look appealing to consumers; they also suggested incorporating a recipe blog into the website so as to show off potential applications of the products on offer.
Website Design To achieve the desired results for British Bakeware, our professional designers used pastel colours – soft greens and oranges – to give the impression of a traditional store front. When designing the website’s homepage, we included several tantalising images of baked goods to whet the user’s appetite (appealing to the stomach as well as to the eyes is a handy psychological trick for website designers!) Overall, we feel that we succeeded in creating an attractive website with plenty of engaging visual features that don’t get in the way of the site’s navigation.
Baking Blog The online recipe book is a crucial part of the British Bakeware website. Like any blog page, it serves as an additional channel through which the company can promote their products, and the Bakeware team can share their posts on Twitter, Facebook, and other social media channels with ease. However, this blog also has many bespoke features that other blog engines don’t offer – for example, we used some custom styling techniques to imitate the look and feel of a real recipe book (with ingredient lists and clear step-by-step instructions), and each blog post has a ‘Products you may find helpful’ section that’s designed to drive traffic from the recipes to the checkout.
Social Media We also worked hard to ensure that British Bakeware’s website was fully integrated with relevant social media channels. For example, the site’s homepage features a Pinterest feed that shows users all of the company’s latest pins; furthermore, the recipe blogs use special markup to make ‘recipe cards’ – short summaries of the relevant recipe – appear when the image from a recipe post is shared on Pinterest. British Bakeware can also be found on Twitter, Facebook, and Google+, and we took care when designing the website to ensure that users would be able to find the company’s social profiles at a glance.
This website uses cookies. By browsing our website, you consent to the use of cookies – view our privacy policy for more information.
GOT IT